Three children grow up on a turn-of-the-century Brooklyn street: Jimmy, an incorrigible teenage thug; Frankie, a fourth-grade math prodigy; and Flory, a sheltered little girl with a foolhardy plan. Each faces a tragedy beyond which their lives will never be the same, and as they struggle into adulthood, the ghosts of their tragic pasts follow.

From the corrupt New York Democratic Party to the underground crime culture of Prohibition, from New York to Europe, Africa, and South America, from endemic poverty to endless wealth, these three grow into terribly wounded adults, passing on to the next generation the traditions of the street where it all began. 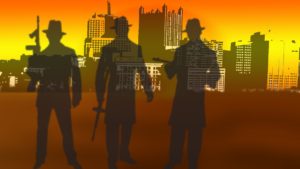 When finished, this will be a nine-book series (three trilogies), showing each main character at every stage of their lives.

The first book, The Cub, will begin Frankie Delaney’s journey, explore the tragedy that will haunt and define him for a lifetime, and meet the characters in his neighborhood who will radically alter the trajectory of this young man’s life.

In Book Two, The Hunter, we will find out what made Jimmy Donegan the neighborhood tough, how he plans to use his strength of body (if not character) in years to come, and see his choices lead him ever-closer to the precipice of disaster.

Book Three, The Lamb, introduces Flory Meier, an innocent to everything but the hardships inherent in being Jewish in New York City at the turn of the century. We will learn her parents’ heartbreaking history, and watch as her innocence leads her into darkness, as it is is slowly peeled away.